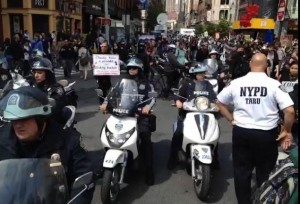 Keeping with the decades long practice of dumping news that might be unsettling to the public during the late days of summer, when more of the populace is on vacation or generally not paying attention, we’ve learned recently that Goldman Sachs will not be prosecuted by the U.S. Justice Department for its CDO deals and, most likely, neither will Jon Corzine for misplacing $1.6 billion dollars of MF Global’s money. Add those to the lack of prosecutions of top dogs at AIG, Citigroup, Bear Stearns, Lehman Brothers, Fannie Mae, Freddie Mac, and a practice and pattern emerges.

These firms, after all, were simply engaging in the time-honored pastime of honing their skills as Masters of the Universe.  That pastime is very much respected by the law firm of Covington and Burling, which has such an active revolving door to the U.S. Justice Department that it lists more than three dozen partners or staff who previously worked there or at its U.S. Attorney division.  And currently working there, of course, are the top three men making decisions on prosecutions, all walking through the revolving door from Covington and Burling to the Justice Department.

Prosecuting great corporate men trying to achieve nothing more than the great Ayn Randian dream of greed and selfishness is so yesterday.  But in what is looking more and more like the Praetorian Guard that protected the Emperors of Rome, we are also detecting a practice and pattern of vicious prosecutions against those that might pluck a nickel from the Wall Street robber barons.

Yesterday, the syndicated columnist Susan Antilla penned an eye-opening piece for CNN. The article contrasted the “justice” received by Goldman Sachs to that received by Sergey Aleynikov, the former Goldman Sachs employee who was charged within 48 hours of Goldman asserting he had taken computer source code for its high frequency trading operation. High frequency trading is effectively one more weapon in Wall Street’s arsenal for looting the public.

Aleynikov was first prosecuted by the U.S. Attorney’s office.  He had served almost a year in prison when his appeal was heard.  It took only oral arguments for the Second Circuit Court of Appeals to throw out the case. In a tersely worded statement, the court said:  “The mandate is recalled, the order of February 16, 2012 is rescinded, and the following order is entered. ‘Upon due consideration, it is hereby ordered, adjudged and decreed that the judgment of conviction is reversed on both counts and the matter is remanded to the district court for the limited purpose of releasing the defendant upon the terms of bail that were previously set. An opinion shall follow in due course.’ ”

The final opinion was handed down on April 11, 2012, finding that the prosecutors misapplied the Federal corporate espionage laws.  Then, on Thursday, August 9, 2012, the unthinkable happened.  Aleynikov was arrested and charged based on the same set of facts by Cyrus Vance of the Manhattan District Attorney’s office. Under the Fifth Amendment to the U.S. Constitution, an individual is not permitted to be tried twice for the same crime.  But when you take from Wall Street, all bets are off apparently.

The Aleynikov case is striking in similarity to the “Squawk Box” case, where low level employees of major Wall Street firms were tried and convicted by the U.S. Attorney’s office, only to have their conviction thrown out by the Second Circuit Appellate Court.  In the Squawk Box case, retail stockbrokers were charged with placing phones next to the internal public address system and letting brokers at a day trading firm listen in.  (Read our in-depth report here.)

Prosecutors were so over-zealous to protect the interests of Wall Street, that they withheld depositions that would have cleared the defendants by proving that the information was not deemed to be confidential, the core allegation of their prosecution.  The appellate court’s ruling was scathing.  Sadly, we are unlikely to see anyone punished for that wrongful prosecution.

If we look at the pattern of prosecution, together with the fact that the New York City Police Department is renting out armed, uniformed police officers to Wall Street (Paid Detail) and setting up a $150 million spy center jointly operated with Wall Street, thoughts of the Roman Emperors’ Praetorian Guard emerge. Watch this stunning video, entered in a court case, of Occupy Wall Street protestors peacefully seeking a realignment of their democracy, then being brutalized by the New York City Police Department, for more proof of law enforcement’s fealty to Wall Street.

And let us not forget that New York City’s Mayor, Michael Bloomberg, owes his wealth to Wall Street. There are currently an estimated 290,000 Bloomberg data terminals on Wall Street trading floors and offices around the globe, generating approximately $1500 in rental fees per terminal per month. That’s a cool $435 million a month or $5.2 billion a year, the cash cow of the Bloomberg businesses.