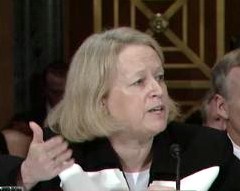 Mary Schapiro, Chair of the SEC

As if we needed more evidence – the Second Circuit Appellate Court handed down a decision yesterday strongly suggesting that if you stick with the Wall Street traders’ code and steal for the house, you’re good to go.  But take money from the house and all manner of deceit will be leveraged against you to convict.  The Wall Street Code is inviolate; the order of things must be maintained at all cost.

Six Wall Street men have lost seven years of their life, their careers, underwent two jury trials which took a devastating emotional toll on themselves and their families, were convicted and sentenced – while two SEC lawyers and two Assistant U.S. Attorneys sat on deposition transcripts that could have cleared the defendants of the central charge in the case.

Who else let this travesty of justice play out: the General Counsel’s office of Merrill Lynch which sat in on those depositions and heard the testimony first hand  and John Gleeson, a Federal District Court Judge who, after the depositions surfaced shortly after sentencing and he was made aware, refused a petition for retrial.

Andrew J. Frisch, attorney for Kenneth Mahaffy, learned of the SEC’s deposition transcripts four days after Court sentencing, when the SEC commenced an administrative charge.  But for his tireless pursuit of justice, this corrupted process would likely have never seen the light of day. Fortunately, the men have been free on bail awaiting the Appellate decision.

The charges were first brought in 2005 and made no sense from day one to Wall Street veterans who had worked for retail stock brokerage firms.  The case was dubbed in the press as the “Squawk Box” case. Prosecutors from the U.S. Attorney’s office in Brooklyn alleged that three brokers from Merrill Lynch, Smith Barney and Lehman Brothers misappropriated confidential information from their firms by placing phones next to the internal public address system known as the “Squawk Box” and letting day traders at A.B. Watley listen in.

I worked in a retail brokerage office for 21 years and here is what happens while  that squawk box is turned on: cleaning people are mulling about; retail clients are coming and going; the guy from the deli is delivering food; brokers from other firms are dropping by to go out for lunch; carpet installers are laying new carpet; telephone repairmen are working on the lines.  All in earshot of that information.

When Merrill Lynch or Smith Barney make a corporate decision to stream internal communications into retail brokerage offices, it’s corporate management’s job, not the brokers, to make sure nothing confidential comes over that Squawk Box.  To suggest that a retail brokerage office, open five days a week to the general public, has any capacity to police what’s coming over the Squawk Box is bogus and specious.

And yet, seven years of six men’s lives have been destroyed, untold millions in taxpayers’ money has been used to depose, indict, hold two trials, and defend  appeals.  And after a scathing rebuke by the Second Circuit Appellate Court, the prosecutor’s office isn’t sure if it will retry the case for the third time.

Back in February of this year, I obtained copies of the depositions in the case.  The depositions were not just an indictment of how this case was tried but of the Wall Street system itself.

Here is the complete text of one abbreviated example alluded to in the Appellate decision:

Brian Hull supervised Henry Mulholland. Mulholland was the head of Merrill Lynch’s institutional equity department.  The government called Mulholland to testify at both trials because it fit their narrative.  But here is what his boss, Brian Hull, stated in his deposition on November 1, 2006 while the following individuals listened: Sandeep Satwalekar and Robert Murphy, lawyers for the SEC; David Kornblau, General Counsel, Global Regulatory Affairs for Merrill Lynch.

Mr. Murphy [lawyer for the SEC]: “Just to make sure I understand, is it your testimony that, in your opinion, customer order flow information ceases to be confidential the moment it is announced on the squawk box?”

The Witness [Brian Hull]: “I guess what I want to make sure of is in terms of when we say confidential.  Client orders and client relationships are always confidential, but when the trader goes over the squawk box and gives an indication, he could have already sent that order – let’s just say it was a listed order on the New York Stock exchange – he could have already put that order on the floor and could be in the crowd displaying that interest as well.  So he could be down on the floor protecting that client’s buy order in the marketplace and simultaneously or right after making the call on the squawk box to say I’m a buyer of – again, in my example of 50,000 Chrysler – and instantly sales traders are sharing that with a very broad section of our client base.

Hull was just one of many witnesses to give depositions to the SEC, taking the same position that the Squawk Box information was not confidential.  The Appellate Court honed in on this in its opinion: “The withheld SEC testimony strongly suggests that the brokerage firms did not treat squawked block order information as confidential and that senior employees and management at the respective firms did not bar the transmission of squawks or take steps to maintain exclusive control of pending block order information.”

The Court also noted:  “The government’s Brady violations have negatively impacted this case in two distinct but related ways. First, the two trials were both unfairly skewed against the defendants, who were forced to mount their defenses without the benefit of material exculpatory and impeaching sworn testimony. Second, the costs of this litigation – in terms of personal, financial and judicial resources and time – have ballooned as a result of the two trials, post-verdict litigation, and two appeals to this court. Our Court and others have long recognized that Brady violations obscure a trial’s truth seeking function and, in so doing, place criminal defendants at an unfair disadvantage.”

Brady refers to the long held requirement that the government must disclose material evidence favorable to a criminal defendant.

Brian Hull’s deposition occurred November 1, 2006.  The first trial occurred in 2007; the second in 2009.  The Appellate Court stated this about the trials: “After the first trial ended with thirty-eight counts of acquittal and a hung jury on the securities fraud conspiracy count, and the jury in the second trial was deadlocked after deliberating for two days on the retried securities fraud conspiracy count, we have little confidence that the result would have been the same had the government complied with its Brady obligations and disclosed the SEC transcripts.”

The court was further vexed to learn of an email between Sandeep Satwalekar, the SEC lawyer, and two of the Assistant U.S. Attorneys trying the case.  The Court wrote: “The prosecutions were products of close collaboration between the United States Attorney’s Office and the SEC, and the government’s trial teams each consisted of ostensibly experienced attorneys from both offices. Several weeks prior to the first trial, Sandeep Satwalekar – the primary SEC staff attorney investigating the case who conducted almost all of the SEC depositions, who was cross-designated as a Special AUSA, and who sat at counsel table during the trial – emailed two of his colleagues on the trial team, AUSAs Michael Asaro, the lead prosecutor, and Sean Casey, the Deputy Chief of the Business and Securities Fraud Unit. He specifically cautioned them that portions of at least one of the deposition transcripts contained possible Brady material: ‘This is the last time I will bring this possible Brady issue up, but look over this excerpt when you get a chance. Tell me whether this requires some disclosure to defense counsel. . . .’ ”

“There is no question that the government knew about the transcript that Satwalekar attached, along with the other twenty-nine transcripts, prior to the first trial. Satwalekar conducted the majority of the depositions. Nine of the twelve on which the defendants based their Brady motion below took place after the initial indictment. The government possessed all thirty transcripts within its electronic database. Ultimately, however, neither the excerpt that Satwalekar sent to his colleagues nor any other portion of the SEC depositions was disclosed in connection with the first trial. The second trial team also failed to disclose any of the transcripts. Although it was aware of the transcripts and had read some of them prior to the retrial, the second team elected not to revisit disclosure decisions, relying instead on the first team’s decisions.”

The court summarized its findings as follows: “We conclude that the government’s failure to disclose portions of the transcripts violated Brady and that these Brady violations undermined confidence in the jury’s verdict. Therefore, we vacate the misappropriation of confidential information component of the conspiracy convictions. Finally, because the district court did not adequately instruct the jury on the scope of honest services fraud, we vacate the honest services fraud component as well.”

Against this backdrop of seven years of prosecuting a case based on an internal  public address system, it is relevant to note that we have yet to see prosecutions involving the $1.6 billion still missing at MF Global; prosecutions against anyone who sat in the corner offices at the litany of Wall Street firms that failed in 2008; or any individual who has been rigging the Libor interest rate since 2005.