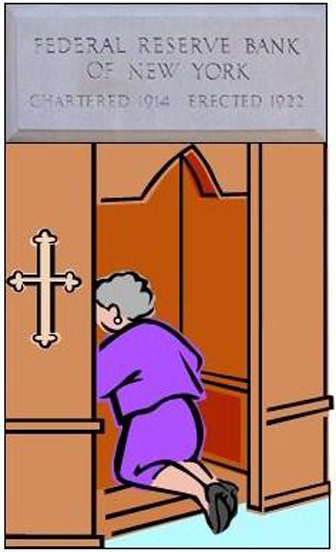 In unusually swift fashion (unlike the long court action to obtain details of the secret trillions in loans the Fed lavished on domestic and foreign banks) the Federal Reserve Bank of New York today handed over emails and other documents showing that Barclays, the first firm to be charged in rigging the interest rate benchmark known as Libor, was using the New York Fed’s stately offices as a confessional.

In one email, an unnamed confessor from Barclays tells Fabiola Ravazzolo, a Senior Financial Economist at the New York Fed with a sexy British accent (sort of like that comforting voice on your car GPS) that, yes, he’s sinned.

FR is Fabiola Ravazzolo;  the colon represents the Barclays employee.

FR: And, and why do you think that there is this, this discrepancy? Is it because banks maybe they are not reporting what they should or is it um…

: Well, let’s, let’s put it like this and I’m gonna be really frank and honest with you.

FR: No that’s why I am asking you [laugher] you know, yeah [inaudible] [laughter]

: You know, you know we, we went through a period where

: We were putting in where we really thought we would be able to borrow cash in the interbank market and it was

: Above where everyone else was publishing rates.

: And the next thing we knew, there was um, an article in the Financial Times, charting our LIBOR contributions and comparing it with other banks and inferring that this meant that we had a problem raising cash in the interbank market.

: So it’s never supposed to be the prerogative of a, a money market dealer to affect their company share value.

: And so we just fit in with the rest of the crowd, if you like.

: So, we know that we’re not posting um, an honest LIBOR.

This phone conversation took place on April 14, 2008.  And the man who was the President of the New York Fed at the time, Timothy Geithner, received the ultimate promotion to U.S. Treasury Secretary.  Geithner has acknowledged he knew about the misreporting of Libor in 2008.  But the rigging continued and we are left in the dark as to why it was allowed to continue.  We know from affidavits in Canada that major U.S. banks were also involved in rigging Libor.  But we see no prosecutions or Congressional requests for those emails to be made public.

One positive aspect of this mess is that it shines some sunshine on this strange duck we call the New York Fed.  It is the only one of the 12 Federal Reserve Banks to have a state of the art trading floor that rivals those of Goldman Sachs and Morgan Stanley.  It has a gold vault.  It has a currency vault.  It has relationship managers for financial institutions it supervises.  It has conflicts of interest to boggle the mind.  (Also see here.) And it somehow calls itself the primary regulator of the largest, serially corrupt banks in America. 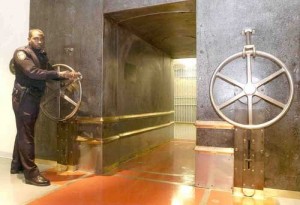 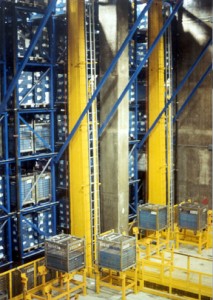 I’ve seen photos that were previously on-line of the lavish, remodeled trading floor of the New York Fed.  Those photos have been removed from the web site.  Despite multiple requests to the New York Fed to obtain those photos, nothing has been forthcoming.