Wall Street’s audacity to corrupt knows no bounds and the cooptation of government by the 1 per cent knows no limits.  How else to explain $150 million of taxpayer money going to equip a government facility in lower Manhattan where Wall Street firms, serially charged with corruption, get to sit alongside the New York Police Department and spy on law abiding citizens.

According to newly unearthed documents, the planning for this high tech facility on lower Broadway dates back six years.   In correspondence from 2005 that rests quietly in the Securities and Exchange Commission’s archives, NYPD Commissioner Raymond Kelly promised Edward Forst, a  Goldman Sachs’ Executive Vice President at the time, that the NYPD “is committed to the development and implementation of a comprehensive security plan for Lower Manhattan…One component of the plan will be a centralized coordination center that will provide space for full-time, on site representation from Goldman Sachs and other stakeholders.”

At the time, Goldman Sachs was in the process of extracting concessions from New York City just short of the Mayor’s first born in exchange for constructing its new headquarters building at 200 West Street, adjacent to the World Financial Center and in the general area of where the new World Trade Center complex would be built. According to the 2005 documents,  Goldman’s deal included $1.65 billion in Liberty Bonds, up to $160 million in sales tax abatements for construction materials and tenant furnishings, and the deal-breaker requirement that a security plan that gave it a seat at the NYPD’s Coordination Center would be in place by no later than December 31, 2009. 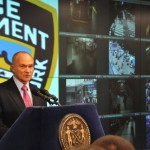 The surveillance plan became known as the Lower Manhattan Security Initiative and the facility was eventually dubbed the Lower Manhattan Security Coordination Center. It operates round-the-clock.  Under the imprimatur of the largest police department in the United States,  2,000 private spy cameras owned by Wall Street firms, together with approximately 1,000 more owned by the NYPD, are relaying live video feeds of people on the streets in lower Manhattan to the center.  Once at the center, they can be integrated for analysis.  At least 700 cameras scour the midtown area and also relay their live feeds into the downtown center where low-wage NYPD, MTA and Port Authority crime stoppers sit alongside  high-wage personnel from Wall Street firms that are currently under at least 51 Federal and state corruption probes for mortgage securitization fraud and other matters.

In addition to video analytics which can, for example, track a person based on the color of their hat or jacket, insiders say the NYPD either has or is working on face recognition software which could track individuals based on facial features.  The center is also equipped with live feeds from license plate readers.

According to one person who has toured the center, there are three rows of computer workstations, with approximately two-thirds operated by non-NYPD personnel.  The Chief-Leader, the weekly civil service newspaper,  identified some of the outside entities that share the space: Goldman Sachs, Citigroup, the Federal Reserve, the New York Stock Exchange.  Others say most of the major Wall Street firms have an on-site representative.   Two calls and an email to Paul Browne, NYPD Deputy Commissioner of Public Information, seeking the names of the other Wall Street firms at the center were not returned.  An email seeking the same information to City Council Member, Peter Vallone, who chairs the Public Safety Committee, was not returned. 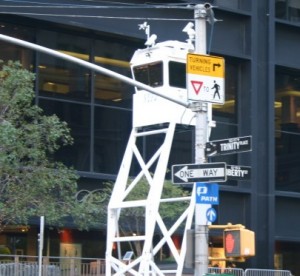 In a press release dated October 4, 2009 announcing the expansion of the surveillance territory, Mayor Michael Bloomberg and Police Commissioner Kelly had this to say:

The project has been funded by New York City taxpayers as well as all U.S. taxpayers through grants from the Federal Department of Homeland Security.  On March 26, 2009, the New York Civil Liberties Union (NYCLU) wrote a letter to Commissioner Kelly, noting that even though the system involves “massive expenditures of public money, there have been no public hearings about any aspect of the system…we reject the Department’s assertion of ‘plenary power’ over all matters touching on public safety…the Department is of course subject to the laws and Constitution of the United States and of the State of New York as well as to regulation by the New York City Council.”

The NYCLU also noted in its letter that it rejected the privacy guidelines for the surveillance operation that the NYPD had posted on its web site for public comment, since there had been no public hearings to formulate these guidelines.  It noted further that “the guidelines do not limit police surveillance and databases to suspicious activity…there is no independent oversight or monitoring of compliance with the guidelines.”

According to Commissioner Kelly in public remarks, the privacy guidelines were written by Jessica Tisch, the Director of Counterterrorism Policy and Planning for the NYPD who has played a significant role in developing the Lower Manhattan Security Coordination Center.  In 2006, Tisch was 25 years old and still working on her law degree and MBA at Harvard, according to a wedding announcement in the New York Times.   Tisch is a friend to the Mayor’s daughter, Emma; her mother, Meryl, is a family friend to the Mayor.

Tisch is the granddaughter and one of the heirs to the now-deceased billionaire Laurence Tisch who built the Loews Corporation.  Her father, James Tisch, is now the CEO of the Loews Corporation and was elected by Wall Street banks to sit on the Federal Reserve Bank of  New York until 2013 representing the public’s interest. (Clearly, the 1 per cent think they know what’s best for the 99 per cent.)

The Federal Reserve Bank of New York is the entity which doled out the bulk of the $16 trillion in bailout loans to the U.S. and foreign financial community.  Members of Tisch’s family work for Wall Street firms or hedge funds which have prime broker relationships with them.  A division of Loews Corporation has a banking relationship with Citigroup.

The Tisch family stands to directly benefit from the surveillance program.  In June of this year, Continental Casualty Company, the primary unit of the giant CNA Financial which is owned by Loew’s Corp., signed a 19-year lease for 81,296  square feet at 125 Broad Street – an area under surveillance by the downtown surveillance center.

Loews Corporation also owns the Loew’s Regency Hotel on Park Avenue in midtown, an area which is also now under round-the-clock surveillance on the taxpayer’s dime.

Wall Street is infamous for perverting everything it touches: from the Nasdaq stock market, to stock research issued to the public, to auction rate securities, mortgages sold to Fannie Mae and Freddie Mac, credit default swaps with AIG, and mortgage securitizations.  Had a public hearing been held on this massive surveillance sweep of Manhattan by potential felons, hopefully someone might have pondered what was to prevent Wall Street from tracking its employee whistleblowers heading off to the FBI offices or meeting with a reporter.

One puzzle has at least been solved.  Wall Street’s criminals have not been indicted or sent to jail because they have effectively become the police.

This article originally appeared at www.CounterPunch.org.