Prince Jamie, His Court Jesters, and His Royal Palaces 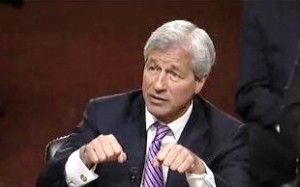 Jamie Dimon, between jobs and mansions in the late 90s, took up boxing. Here, he shadow boxes with Senate Banking on June 13, 2012. Check out the cufflinks.

As the Prince took his chair in the stately chambers correctly called Senate Banking (this is where jesters whose campaigns are paid with banking money meet to bestow gifts on their benefactors – gifts like the Gramm-Leach-Bliley Act to deregulate Wall Street) six brave citizens yelled out against him.

Citizen Tighe Barry of Code Pink, who regularly beseeches his empire to stop killing and making war, called out loudly that Prince Jamie was a crook, a predator and should be sent to jail. He said, “These guys are not the job creators, they’re the job destroyers.” Young citizen Rob Wohl joined four fellow citizens from Occupy Our Homes.org, shouting “stop foreclosures now.” 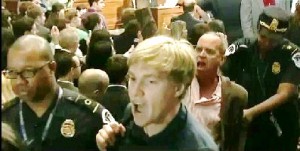 Rob Wohl, foreground, with Tighe Barry directly behind, protesting at the Senate Banking hearing on June 13, 2012.

Citizen Deborah Harris, a former paramedic who said she lost her home due to unethical business practices by the Prince’s bank, said: “I told him to face up to the little people, like me, who had saved up for years only to have their homes taken by giants. When they slapped the handcuffs on me, I felt very proud that I was a voice who stood-up.”

The Prince frowned at the unruly citizens but smiled soon thereafter as his Republican court jesters flattered and cajoled and asked for his opinion on how to run the empire.  (Watch the whole farce here.)

Court Jester Bob Corker lavished praise upon the prince:  “You’re obviously renowned, rightfully so I think, for being one of the best CEOs in the country.”

Court Jester Jim DeMint said: “I would like to come away from the hearing today with some ideas on what you think we need to do, what we maybe need to take apart that we’ve already done, to allow the industry to operate better.”

As the court jesters heaped adulation upon the Prince, it was easy to forget that the Prince was in the stately chamber to explain how he had gambled with $200 billion of citizens deposits and lost billions of those dollars – the exact amount of which he refuses to quantify or to say how leveraged the bet was or why it was transacted in the far away kingdom of Great Britain. 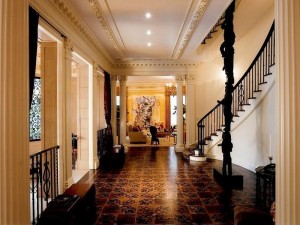 The Prince has added to his vocabulary since he went to oversee the Royals’ treasury on Wall Street from his 25 room mansion in Chicago.  He begins his sentences condescendingly with the word  “So.” This has the Royal effect of letting his court jesters understand that they could not possibly comprehend the complexities of what he is about to tell them so they might as well nod off as he shows off his brilliance.  Here is an example of his many strategic uses of the word, “So…” 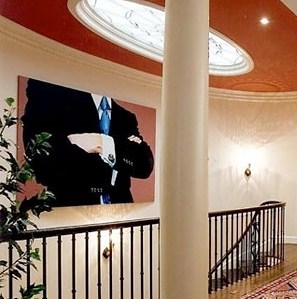 Dimon's clothes are apparently too sexy for his head. This headless self-portrait hung on the wall of the grand staircase in his former Chicago mansion.

The Prince looked most dapper in his dark suit and striped tie and his cufflinks emblazoned with the Seal of the President of the United States.  Prince Jamie’s former mentor, Sandy Weill, who helped the Prince get rid of the pro-citizen legislation, the Glass-Steagall Act, has one of the pens used by President Clinton to sign the Royal repeal legislation, so it is only fitting that the Prince have a momento from the Oval Office as well.  Just which President conferred the cufflinks upon the Prince is not clear.  But since all Presidents report to the Royals on Wall Street, does it really matter.  (Here is a view of what the cufflinks look like at a source for commoners.)

After a very stressful week, the Prince will likely retire to his 34-acre country estate for the weekend.  The 1930s mansion is sequestered in the woods of Bedford, New York.  Prince Jamie paid the princely sum of $17.05 million for the estate five years ago.  Do not concern yourself that the Prince may be losing money on this home; he is a skillful real estate operator.

A previous home that the Prince owned in Chicago, when his Royal duties took him to run Banc One, had a mere 9 bathrooms, 8 bedrooms and 15,000 square feet and was therefore hardly fitting for the Prince. He purchased the home for $4.7 million and sold it for $6.8 million, after he originally put it on the market for $13.5 million in 2007. The Prince was so sad that he didn’t get his full asking price that JPMorgan Chase picked up $421,458 of his real estate commissions, fees and expenses because he was relocating to New York.

There were three real Senators present among the court jesters, asking the difficult questions of the Prince, all were Democrats: Senator Jeff Merkley of Oregon, Senator Bob Menendez of New Jersey, Senator Sherrod Brown of Ohio.  You can be certain that they will not be receiving future largess from the treasury of either the Prince or JPMorgan Chase.

For a detailed look at how the casino inside JPMorgan Chase operated, see an in-depth report here.

For people all over America losing their modest homes to the Frankenbanks that Prince Jamie helped to create, Citigroup and JPMorgan Chase, the pictures of Jamie Dimon’s  mansions provide an idea of where your money went and how you can claw it back.