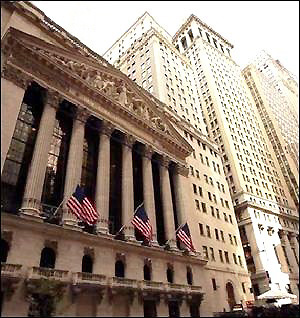 The fallout from the new book, “Flash Boys” by Michael Lewis continues. Yesterday, Jonathon Trugman wrote in the New York Post that “These traders who use the HOV lane to get ahead of investors could not do their trades without the full knowledge and complicity of the New York Stock Exchange and Nasdaq.”

Trubman went on to compare the two best known stock exchanges in the U.S. to houses of ill repute, writing: “What is clearly unfair and unethical — and, frankly, ought to be outlawed — is how the exchanges have essentially taken on the role of running a high-priced, high-frequency brothel…”

While it’s true that the New York Post might possibly overuse sexual analogies (on August 10, 2011 it ran a front page cover comparing the Dow Jones Industrial Average to a “hooker’s drawers”), in this instance Trugman is spot on.

Not only are the New York Stock Exchange and Nasdaq allowing high frequency traders to co-locate their computers next to the main computers of the exchanges to gain a speed advantage over other customers at a monthly cost that only the very rich can afford to pay but they’re now tacking on infrastructure charges that price everyone out of efficient use of the exchanges except the very top tier of trading firms.

Lewis writes in “Flash Boys” that “both Nasdaq and the New York Stock Exchange announced that they had widened the pipe that carried information between the HFT [high frequency trading] computers and each exchange’s matching engine. The price for the new pipe was $40,000 a month, up from the $25,000 a month the HFT firms had been paying for the old, smaller pipe.”

By late 2011, according to Lewis, “more than two-thirds of Nasdaq’s revenues derived, one way or another, from high-frequency trading firms.”

And we’ll take Trugman’s analogy one step further: the cops on the beat who have had their palms greased to turn a blind eye to the brothels are drinking their coffee and gobbling their donuts at the Securities and Exchange Commission.

Lewis writes in “Flash Boys” that the Royal Bank of Canada conducted a study in which they “found that more than two hundred SEC staffers since 2007 had left government jobs to work for high-frequency trading firms or the firms that lobbied Washington on their behalf.”

Lewis says that some of these same staffers had played key roles in deciding whether to regulate high frequency trading, specifically citing Elizabeth King, who quit the SEC to work for Getco, one of the largest high frequency traders. Says Lewis: “The SEC, like the public stock exchanges, had a kind of equity stake in the future revenues of high-frequency traders.”

There is good reason for the growing outrage. Not only is one of Wall Street’s former top lawyers, Mary Jo White, heading up the SEC but the Federal agency is flagrantly ignoring the law that created the SEC and its statutory mandate to maintain a non-discriminatory playing field at the stock exchanges.

Under the Securities Exchange Act of 1934, the SEC was created to rein in Wall Street’s fleecing of the American public and the excesses that led to the 1929 crash. Under the legislation, the SEC is specifically charged with policing the stock exchanges. Section 6 of the Act mandates that the SEC must ensure that exchanges maintain “the equitable allocation of reasonable…fees, and other charges among its members and issuers and other persons using its facilities.” The same section requires “just and equitable principles of trade,” the removal of impediments to a “free and open market” and specifically states that an exchange shall not “permit unfair discrimination between customers.”

The SEC already has existing law to prosecute these flagrant abuses. It has simply chosen to look the other way at high frequency trading scams. And, despite, what Vanguard founder Jack Bogle says, the little guy is getting seriously harmed by these practices. Not only is the average American’s public pension fund and mutual funds in their 401(k) getting ripped off, but small-time stock investors have suffered egregiously from intraday crashes and “glitches” caused by high speed trading. Even the age-old, simple technique called a “stop-loss order” used by small investors across America to protect their profits in a stock can no longer be trusted in this high frequency-ruled world of Wall Street.

On May 6, 2010, the stock market briefly plunged 998 points with hundreds of stocks momentarily losing 60 per cent or more of their value, then reversing course and recouping most losses. The event became known as the “Flash Crash.” The Chair of the SEC at that time, Mary Schapiro, told the Economic Club of New York that “A staggering total of more than $2 billion in individual investor stop loss orders is estimated to have been triggered during the half hour between 2:30 and 3 p.m. on May 6. As a hypothetical illustration, if each of those orders were executed at a very conservative estimate of 10 per cent less than the closing price, then those individual investors suffered losses of more than $200 million compared to the closing price on that day.”

The flash crash report from regulators that was issued in September 2010 was itself a cover-up of a broken stock exchange system. The report said that “Detailed analysis of trade and order data revealed that one large internalizer (as a seller) and one large market maker (as a buyer) were party to over 50 per cent of the share volume of broken trades, and for more than half of this volume they were counterparties to each other (i.e., 25 per cent of the broken trade share volume was between this particular seller and buyer).” But the report failed to identify these culprits.

Wall Street On Parade filed a Freedom of Information Act request at the time with the SEC for the names of these firms. The SEC refused to provide that information.

The reference in Schapiro’s statement to an “internalizer” highlights another flagrant abuse of the Securities Exchange Act of 1934. The SEC is sitting idly by allowing the Too-Big-To-Fail banks run unregulated stock exchanges called “Dark Pools” inside their securities divisions. According to Lewis, “Collectively, the banks had managed to move 38 percent of the entire U.S. stock market now traded inside their dark pools…”

Dark pools are sucking transparency out of the stock market and seriously calling into question the credibility of stock prices. Dark pools match buy and sell orders in the dark and delay making the trade known to the public and stock exchanges until after the trade is transacted in secrecy. Some of the largest dark pools are Credit Suisse’s Crossfinder; Morgan Stanley’s MS Pool, and Citigroup’s Citi Match.

Under the Securities Exchange Act of 1934 “the term ‘exchange’ means any organization, association, or group of persons, whether incorporated or unincorporated, which constitutes, maintains, or provides a market place or facilities for bringing together purchasers and sellers of securities…” Section 5 also clarifies that it is “unlawful” for any broker, dealer “to effect any transaction in a security” unless it is registered as an exchange or has received an exemption “by reason of limited volume….”

There is nothing small potatoes about dark pools controlling 38 percent of the U.S. stock market. What has very likely happened here is that by moving so much stock trading away from the regulated exchanges like the New York Stock Exchange, the big banks’ dark pools have forced the traditional exchanges to succumb to unseemly revenue sources to survive.

Exactly 82 years ago this week, the U.S. Senate Banking Committee hauled Richard Whitney, President of the New York Stock Exchange, before a hearing to begin a forensic two-year investigation of the Wall Street stock brothels that had collapsed under their own corruption, crashed the U.S. economy and ushered in the Great Depression. This time around, we’ve had no such forensic examination of stock exchange practices since the Wall Street crash of 2008.

For the entire past week, newspapers and television have blasted the news around the globe that U.S. stock markets are rigged. By writing in the New York Times Magazine, appearing on 60 Minutes, Meet the Press, CNBC, Bloomberg TV, and giving out dozens of newspaper interviews, Michael Lewis has done what the SEC and Congress have failed miserably in achieving. He has reached critical mass in delivering a public mandate for change. It’s now time for serious, comprehensive Congressional hearings to begin. Hiding from the truth will not restore trust in our markets.