Ms. Yellen, It’s Time to Pay Attention to the Slowdown 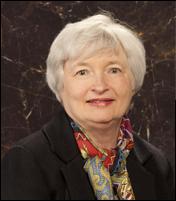 Janet Yellen, Chair of the Federal Reserve Board of Governors

The new Chair of the Federal Reserve Board, Janet Yellen, is one of the most seasoned and knowledgeable central bank chiefs in the 100-year history of the Fed. But there was one sentence in Yellen’s testimony on Tuesday before the U.S. House Financial Services Committee which is alarming. Yellen told the Congressional panel:

“Inflation remained low as the economy picked up strength, with both the headline and core personal consumption expenditures, or PCE, price indexes rising only about 1 percent last year, well below the FOMC’s 2 percent objective for inflation over the longer run.”

A strong economy is incompatible with declining inflation. One or the other will win out. In a consumer based economy such as the United States, where personal consumption represents 70 percent of GDP, preventing deflation from getting a foothold is prominently on the Fed Chair’s radar screen, whether it is acknowledged or not.

Yellen’s greatest enemy to succeeding in her job may be her inundation with the vast quantities of economic research spewed out by her employer and its 12 regional banks. Unfortunately, much of that research takes the pulse of the economy in the rearview mirror rather than in real time. During rapid and volatile economic currents, Yellen would be well advised to start listening carefully to real-time reports coming from CEOs, CFOs, Purchasing Managers and real business owners across America.

Yellen should be paying close attention to see if the following phrases emerge from the above group: “sharp slowdown,” “unanticipated contraction in sales,” “weakness we did not foresee coming,” and “abrupt.”

Just such a message came yesterday when Cisco’s CFO, Frank Calderoni, told MarketWatch that “Clearly, there’s been a slowdown and it’s been very abrupt. It’s difficult to determine how long it will last.”

As has been regularly pointed out, but perhaps the Fed still needs to be reminded of, this economic period has no equivalent, other than the Great Depression. From the Wall Street collapse to the unprecedented income and wealth inequality which left a nation of consumers unable to consume, the parallels between now and then should not be dismissed. It was Herbert Hoover who pointed out in his presidential memoirs that U.S. output can and did abruptly hit a brick wall.

We did not see the same hitting of the brick wall from 2008 to 2012 as was witnessed between 1929 and 1933 because this time around we had safety nets already in place that did not exist after the stock market crash of ’29. The Social Security Act was enacted on August 14, 1935; FDIC insurance on bank deposits was created under the Banking Act of 1933; it was not until August 1937 that 48 states, Alaska, Hawaii, and the District of Columbia had enacted their own unemployment insurance laws, according to the U.S. Department of Labor.

But safety nets come at a steep price. The U.S. debt now stands at over $17 trillion and the Fed’s balance sheet has risen to over $4 trillion as a result of its bond-buying program that has pumped more than $1.02 trillion of artificial stimulus into the economy over the past year – money that now seems to have ended up artificially inflating stock and bond markets in emerging markets rather than creating U.S. jobs and a sound path toward U.S. economic stability.

Other real time economic warnings abound. According to data compiled by Bloomberg, the Personal Consumption Expenditures Price Index, minus food and energy costs, “rose 1.2 percent in 2013, matching 2009 as the smallest gain since 1955. Of 27 categories of goods and services in the gauge, 18 showed smaller price increases over the past two years.”

Last October, the U.S. Department of Education reported an all time high in the number of homeless students attending public schools – a figure of 1,168,354, which is acknowledged to underestimate the problem. That statistic is not compatible with an economy that has “picked up strength” as Yellen told Congress this week. It is compatible with more troubling news out of the region where Congress holds court. According to the Washington Post this month, the number of homeless families in Washington, D.C. is on pace to double this year.

A weakening economy is also compatible with news coming out of the farm belt where corn and soybean prices are slumping along with farm land prices. According to this morning’s Wall Street Journal, “a monthly survey of Midwestern lenders by Omaha-based Creighton University in January found the outlook for farmland and ranchland prices was the weakest in more than four years.”

The old adage on Wall Street that in times of economic distress people turn to comfort foods is not holding up this time around either. Nestle has just reported the smallest annual sales growth in four years.

As we reported in December, the Federal Reserve Board of Governors gets a great amount of its intelligence from the New York Fed. That is certain to be clouded with the trading positions and agenda of the Wall Street firms that constitute a large part of the input in the intelligence gathering operation. Going forward, Yellen would be well advised to monitor real time data coming directly from the mouths of business people with a front row seat to real time changes in economic conditions.