As Wall Street’s Mayor Exits With $31 Billion in Wealth, Bill de Blasio Must Claim His Mandate for Change 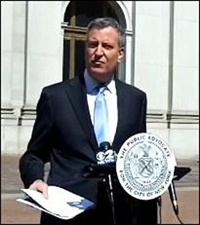 Bill de Blasio, the Next Mayor of New York City

The landslide victory is a harsh rebuke to the current billionaire Mayor, Michael Bloomberg, who used his enormous wealth to overturn the previous two-term limit, giving himself an extra four years in office. It is also a long in the making victory for those who believe Bloomberg’s 12 years in office ushered in a merciless gilded age, bestowing benefits on the rich and Wall Street elite while savaging the poor and middle class, and silencing dissent with brutal police force.

The Republican choice of Joseph (Joe) Lhota demonstrated the tone-deaf quality of the party bosses in New York. Lhota had a 14-year Wall Street investment banking background, previously working for First Boston and PaineWebber before joining the Mayor Rudolph Giuliani administration in 1994, and serving in various capacities including Deputy Mayor for Operations.

Both Bloomberg and his Police Commissioner, Raymond Kelly, had previous Wall Street careers. Kelly was formerly Senior Managing Director of Global Corporate Security at Bear, Stearns & Co. Inc., the Wall Street firm that collapsed in March of 2008. Bloomberg was a former trader at the investment bank, Salomon Brothers, before founding his trading data and publishing empire, Bloomberg L.P. His company provides Wall Street and trading floors around the world with the Bloomberg Terminal, which has been the cash cow of his franchise. It has been previously estimated that the data terminals alone generate upwards of $5 billion a year in revenue. Since taking office, Bloomberg’s personal wealth has grown from $3 billion to a current Forbes estimate of $31 billion as of this past September.

It has not gone unnoticed that Wall Street stock averages are reaching all-time highs as is Bloomberg’s wealth while income inequality in America also reaches unprecedented levels with 46 million Americans living below the poverty level.

This stunning video of Occupy Wall Street protestors being brutalized while peacefully attempting to realign their democracy to one that considers the concerns and needs of the non-rich, was entered in a court case challenging the policies of the Bloomberg administration. The brutality, contrasted against the obscene growth of the Mayor’s wealth while serving in public office, raises the suspicion that Ray Kelly’s police force functioned as more of a Praetorian Guard than a protector of the people’s interest.

If Bill de Blasio is genuine in his desire to repair the image of the Big Apple as a financial cesspool that protects the Wall Street cronies, he has something that President Obama never had: an undisputable landslide victory and a public, according to polls, that is fed up with the status quo and eager for change. The Mayor-elect won’t take office until January 1, but he can begin immediately to use his bully pulpit.

At the top of our list here at Wall Street On Parade are the following practices that enable Wall Street corruption and shrivel democracy. These practices must end before a new era of openness and transparency can begin:

(1)  Remove Wall Street personnel from the Lower Manhattan Security Coordination Center. This high tech spy center, monitoring the comings and goings of law abiding citizens in the streets of Manhattan via over 4,000 street cameras is questionable in itself. Allowing staff from Wall Street firms under Federal criminal investigation to sit side by side with law enforcement is an outrage to a democratic society.

(2)  The jailing of peaceful protestors must end and a new era of protecting and enshrining the right to peaceful assembly and protest must begin. This will require a careful and thoughtful vetting of the next Police Commissioner.

(3)  Freedom of the press has been severely circumscribed under the 12-year reign of the Bloomberg administration which has wantonly ignored the State’s Freedom of Information Law (FOIL). Wall Street on Parade, along with hundreds of other news outlets and public interest groups have been stonewalled and prevented from obtaining public documents, particularly by the NYPD. The FOIL departments at New York City government agencies need a housecleaning, removing Bloomberg-era staff, and reacquainting the new staff with the 5-day turnaround requirement of the statute to facilitate the public’s right to know through an informed free press.

(4)  Wall Street’s back-door money coming into the NYPD through its Foundation must end. No more lavish expense accounts for the Police Commissioner; no more $5 million grants from JPMorgan; no more gilded age balls with the social jet set. The NYPD serves the people of New York and its funding must come from all taxpayers with cronyism removed from the equation. The Foundation needs to die a quick death.

(5)  Speaking of cronyism and pay-to-play, the NYPD Free Detail, the rent-a-cop program must go. There is too much room here for the super rich of New York City to create their own personal Praetorian Guard.

(6)  While the Mayor of New York City cannot overturn court rulings that allow Wall Street to run its own private justice system, forcing both customers and employees into a kangaroo court system known as industry-run mandatory arbitration, the Mayor can use his bully pulpit to shame this practice and draw attention to the ways in which it subverts justice and democracy and enshrines an institutionalized wealth transfer system. Read here and here for an in-depth look at the problem.

Bill de Blasio, we congratulate you on your landslide win and we’ll be watching carefully what you do with it.