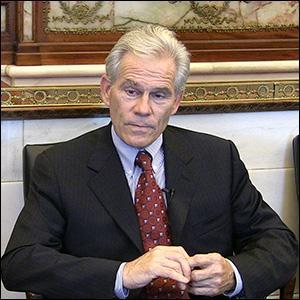 The Public Banking Institute has released a new video making serious claims, backed by graphs and government documents, that the largest Wall Street banks are an unsafe choice for the savings of moms, pops and public payrolls. Citing a December 10, 2012 jointly approved plan between the U.S. Federal Deposit Insurance Corporation (FDIC) and the Bank of England, which resides on the FDIC’s federal web site, the organization says depositors in the U.S. could see portions of their deposits confiscated, similar to what happened in Cyprus, should there be another Wall Street collapse as occurred in 2008.

The first question, of course, is why the U.S. government is negotiating its banking policy with the United Kingdom instead of the U.S. Congress. The obvious answer is that global banks, now allowed to troll the planet in search of the next high-flying derivatives trade, must harmonize their rules to pacify their foreign regulators.

The Cyprus situation is known as a bail-in, rather than a bail-out. The initial Cyprus plan was to give depositors a haircut of 6.75 to 9.9 percent on their deposits. The Parliament shot down that plan and eventually $132,000 of each depositor’s money was returned. In the largest bank, the Bank of Cyprus, depositors, including charities and small businesses, lost 47.5 percent of their savings over the $132,000 amount. Instead, they were given shares in the recapitalized bank and had their non-seized funds frozen in six, nine and 12-month time deposits with the high probability that the freeze would last longer.

The Cyprus situation brought with it the stark realization that depositors are creditors of a bank and face risk along with other creditors.

Rudy Avizius, the writer and producer of the Public Banking Institute video, tells viewers that “There are plans in place for confiscations of depositor accounts in New Zealand, the European Union, Canada, England and the United States.” The Public Banking Institute is an advocate for the formation of public banks by local governments to ensure a ready source of financing of local projects in economic hard times and to ensure the safety of public funds held on deposit.

Mike Krauss, a founding director of the Public Banking Institute, goes even further in the video. Krauss says: “We’re making the argument that the biggest banks on Wall Street really aren’t safe; that they’ve got so much exposure in derivatives and who knows what else – they’re in danger of going down and taking depositors with them. We think money is much safer closer to home. It’s also more productively used,” says Krauss.

One notable aspect of this public interest organization’s view that some of the largest banks are unsafe is that it is not radically different than arguments being made by a highly placed regulatory insider, FDIC Vice Chairman Thomas Hoenig. Testifying before the House Financial Services Committee on June 26 of this year, Hoenig said the biggest Wall Street banks are “woefully undercapitalized,” while calling the industry underpinnings a “very vulnerable financial system.”

In a speech Hoenig delivered to the Levy Economics Institute of Bard College on April 17, 2013, he said “the current configuration of the financial system remains a risk to the public…” Hoenig, along with a growing chorus, is calling for the separation of insured deposit banks from the riskier Wall Street investment banks and brokerage firms, the situation that served this country well from 1933 to 1999 when the Glass-Steagall Act was misguidedly repealed under a heavy lobbying assault by Wall Street.

The configuration that’s delivering sleepless nights to Hoenig and the Public Banking Institute is described in tortuous detail in the Office of the Comptroller of the Currency’s (OCC) first quarter report on derivative activities at the largest banks. If you thought Congress or the regulators has reined in the reckless derivatives activities on Wall Street after the 2008 to 2010 economic collapse, you will be shocked to learn that what they did instead was to concentrate the risk among four Wall Street banks.

While each of the first three banks have over $1 trillion in assets, Goldman Sachs Bank USA is showing $42.2 trillion in derivatives with a sliver of assets of $113.7 billion. Goldman Sachs, founded in 1869 as an investment bank, was miraculously transformed into a bank holding company by the Federal Reserve during the depths of the financial crisis of 2008, gaining access to borrow at the Federal Reserve’s discount window and other bailout schemes rolled out in the wake of the epic collapse of century old financial firms because of…(wait for it)…excessively leveraged bets on derivatives.

The Goldman Sachs Group Inc. is the holding company for Goldman’s far flung empire. According to the OCC, as of March 31, 2013, it held $959.4 billion in assets. But it has chosen to assign its whopping exposure to derivatives not to its risk-taking investment bank but to its insured depository bank. (More on this in a moment.)

All of this, you may well be thinking, ignores the fact that the FDIC insures accounts at U.S. banks for $250,000 per depositor, per insured depository institution, for each account ownership category. If you’ve ever stood in a teller’s line at the bank, you may have noticed the FDIC sticker, which reads, “Backed by the full faith and credit of the United States Government.” Effectively, that means, if the assessments the FDIC charges the banks to meet the needs of the Deposit Insurance Fund (DIF) run short, the taxpayer must prop up the fund to make insured depositors whole.

On top of that promise, the National Depositor Preference statute came into being in the U.S. on August 10, 1993, making all deposit liabilities at insured depository banks preferred over the claims of other creditors.

The serious wrinkle in the above plan is that if one of the four largest banks in terms of derivative exposure was put into receivership by the FDIC, its derivative counterparties have the legal right to assert a super-priority claim on the liquid assets of the bank, jumping in front of depositors. Typically, the counterparties start grabbing their collateral before the public is even aware of the problem.

The Deposit Insurance Fund, as indicated in the video, had a meager $25 billion in assets as of the third quarter of 2012. By the end of the fourth quarter of 2012, it was at $33 billion. But before the Wall Street crash, the DIF held $53 billion, slumping to a deficit of $21 billion in 2009 as a result of the crisis according to Bloomberg News. With the Dodd-Frank prohibition against further taxpayer bailouts of banks; with the House firmly under the control of the Republicans who are demanding deficit reduction; where would the FDIC turn to stem a run on one of the largest banks?

Under the Federal Deposit Insurance Act, the FDIC, acting as a conservator or receiver for an insured depository institution, has the right to “disaffirm or repudiate any contract or lease.” But here again, Wall Street has the FDIC between a rock and a hard place. Let’s say there was a reenactment of 2008 and Citigroup was sliding toward insolvency. If the FDIC repudiated Citigroup’s derivative contracts, it would set off a panic and contagion at the other three largest banks holding trillions in derivatives, creating an even larger financial tab for the Deposit Insurance Fund to meet.

Mark J. Roe, a Harvard law professor who teaches in the field of corporate bankruptcy, authored a paper for the Stanford Law Review on March 6, 2011, addressing the failure of the Dodd-Frank financial reform legislation to change the landscape of this super-priority status for derivatives and repurchase agreements (repos). Roe wrote:

“Congress recently passed a major financial overhaul, the Dodd-Frank Act. It did not change bankruptcy priorities…Dodd-Frank provides for a nonbankruptcy liquidation mechanism for systemically important financial institutions. The FDIC can restructure the failed entity and move its assets and liabilities out from the failed entity. Because each creditor entitlement ties to the Bankruptcy Code, the Code is potentially still central formally. As importantly, Dodd-Frank contemplates a resolution procedure likely to put the derivatives players in about the same position as the Code puts them: there is an automatic stay of sorts in Dodd-Frank for financially central firms—but only for one business day. During that business day, the financial regulators are expected to arrange for the transfer from the failed institution of its entire derivatives book; they cannot cherry-pick among a counterparty’s contracts with the debtor. That is, the stay allows the regulator to find a party that will pick up the derivatives book, which may well effectively cover the unsecured portion of the derivatives book. While the one-day Dodd-Frank stay is more onerous than the Code’s lack of any stay, the expectation of the regulator making good on the unsecured portion of the failed firm’s derivatives book is better. If the regulator fails to transfer the book in one business day, the automatic stay lifts.”

Ellen Brown, the Chairman of the Public Banking Institute, has written exhaustively on the subject of this super-priority status that derivative counterparties hold over the banks. In an April 11, 2013 article for the Huffington Post, Brown addresses the dangers posed to municipal deposits held in these banks. Brown writes: “Local governments keep a significant portion of their revenues in Wall Street banks because smaller local banks lack the capacity to handle their complex business. In the US, banks taking deposits of public funds are required to pledge collateral against any funds exceeding the deposit insurance limit of $250,000. But derivative claims are also secured with collateral, and they have super-priority over all other claimants, including other secured creditors. The vault may be empty by the time local government officials get to the teller’s window. Main Street will again have been plundered by Wall Street.”

The biggest danger is likely to be what the regulators can’t see or anticipate about these Wall Street banks. As Mike Krauss says on the video, “who knows what else” these banks are exposed to besides the derivatives the regulators can see. In 2008, Citigroup officials were caught off guard when tens of billions of dollars in losses had to be brought back onto their books from offshore Structured Investment Vehicles (SIVs) they had created, claiming they didn’t know the SIVs contained put-back clauses.

Just last year, regulators were again caught off guard when JPMorgan traders gambled away $6.2 billion of depositors’ funds in wildly risky and illiquid derivative trades in an outpost in London. On August 14 of this year, the U.S. Justice Department announced criminal indictments against two of the traders involved in the matter, the infamous London Whale case, alleging they hid the extent of the losses.

Until the Glass-Steagall Act is restored by the U.S. Congress, until prosecutors rid Wall Street of its serial wrongdoers parked in the executive suites, it’s best to pay careful attention to this Public Banking Institute video.