President Obama’s Lunch With Hillary and His Larry Summers Problem 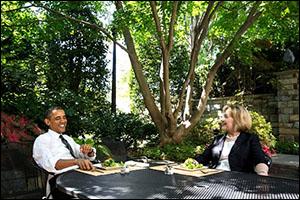 Yesterday, the popular New York Times columnist, Maureen Dowd, weighed in on the potential nod by President Obama to Larry Summers for Chairman of the Federal Reserve.

Dowd writes with the political intuition and confidence of someone who has a Pulitzer on her shelf and three decades under her belt at the New York Times.

Dowd thinks the idea for Summers for Fed chief is being pushed by “a bunch of alpha males who prefer each others’ company and who all flatter themselves that they’re smart enough to know how smart Summers is.” Among that group, Dowd lists former Treasury Secretary Robert Rubin, who teamed up with Summers in the Clinton administration to push for bank deregulation and “paved the way for the country’s ruin.”

Driving this untenable push to place Summers atop the most critical monetary seat in America is, according to Dowd, “the idea that it is somehow historically inevitable that the chairmanship of the Federal Reserve should go to Summers, that it belongs to him…”

The only basis for an attitude that the Fed Chairmanship belongs to Summers is the companion position on Wall Street that they can keep their continuity government going for another eight years and install Hillary Clinton in the White House in 2016.

The Wall Street cartel now controls everything from interest rates set by a rigged Libor benchmark to the price of aluminum going into the price of a can of Coca-Cola, to the cost of crude oil and the fleecing of your wallet at the gas pump, to the shrinking budgets of cities and towns paying out to Wall Street on rigged interest-rate swaps. Why wouldn’t Wall Street expect to continuously control the White House and the Fed?

Hillary now has a fundraising machine gearing up behind her and what looks suspiciously  to a lot of people to be corporate propaganda teeing up in an upcoming NBC mini-series and a documentary by CNN Films on her life and times.  The big money on Wall Street would almost assuredly clinch a Madam Presidency. Summers  is currently on Citigroup’s payroll as a consultant. As the recent experience with Jack Lew shows, when Citigroup puts a former Clintonite on the payroll, there’s an expectation he will end up in a high government position – preferably in charge of the Nation’s money – or, in the case of former Treasury Secretary Robert Rubin, he has just come from a high government position where he fulfilled every item on a Citigroup wish list. After leaving the U.S. Treasury, Rubin immediately joined the Board of Citigroup, where he received $125 million in compensation over the next eight years.

Against that backdrop, here’s the recent timeline in the President’s comings and goings. July 29, 2013, Hillary Clinton arrives at the White House for a private luncheon with the President  on the patio outside the Oval Office. The luncheon comes amidst the furor over rumors that Summers will be nominated by the President to lead the Fed. Two days later, the President meets with the House Democratic Caucus and stridently defends Larry Summers’ good deeds for the Nation during the 2008-2010 crisis (failing to mention that Summers was a key architect of the deregulation that brought on the crisis). The President goes so far as to trash the Huffington Post’s coverage of the issue while doing significant image-building for Summers.

Dowd also smells something afoot with the newfound coziness between the President and his once rival for the White House, writing in another recent column:

“So Obama did not seem fully aware, with their cozy joint ‘60 Minutes’ interview and their laughing alfresco lunch at the White House recently, that instead of co-opting Hillary, he looked like he was handing her the White House silver on a silver platter. The Clintons can present those images as Obama passing the torch and bypassing Joe Biden, just as Bill once took a simple handshake from JFK during a Boys Nation visit to the White House and turned it into an Arthurian moment.”

Dowd also finds notable an issue we have written about previously at Wall Street On Parade – the decidedly cavalier manner that Wall Street’s installed alpha males show to those elected by the people to ostensibly run the government.

Dowd writes of Summers: “Once, when Vice President Biden was talking to a small group at a holiday party, Summers yawned, checked his watch and walked away while Biden was in midsentence.”

We’ve previously commented on this infamous video clip in Michael Moore’s film,  “Capitalism: A Love Story,” where Treasury Secretary, Donald Regan, leans toward the ear of President Ronald Reagan while he is delivering a speech and tells him to “speed it up.” President Reagan does nothing to quell the impression that Regan, the former Chairman and CEO of the big Wall Street firm, Merrill Lynch, is his boss, passively accepting the criticism and picking up his pace. Later, Regan would become President Reagan’s Chief of Staff, viewed by many as the Acting President of the United States.

There is also the deeply troubling revelation in Ron Suskind’s book, “Confidence Men.” The book describes how President Obama told Treasury Secretary Tim Geithner to “wind down” Citigroup and Geithner ignored the directive.

Geithner is currently writing his memoirs while on the payroll of the Council on Foreign Relations. Robert Rubin is Co-Chairman of that organization.