A Few Glitches in the President’s Month Long Charm Offensive

The sine qua non of image handlers dealing with negative revelations in the media is to infuse the happy faces of children and puppies into the equation. 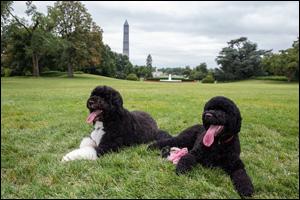 Did you hear that the Obamas have a new puppy? Her name is Sunny and like her big brother, Bo, she’s a Portuguese Water Dog. There’s photos and even a video at WhiteHouse.gov showing the adorable pair frolicking on the White House lawn.

As former NSA contractor, Edward Snowden, has continued to leak documents to newspapers showing that President Obama has overseen a surveillance dragnet on innocent Americans and U.S. allies, raising serious questions about this former constitutional law professor’s respect for democratic ideals, the President took to the road in a bus during the month of August to promote a new agenda to help the middle class. This past weekend the emphasis was on making college affordable to middle class kids, followed by more photos of kids and the President.

Yesterday, around the same time the White House was highlighting a photo of the President kicking a soccer ball with kids in Tully, New York, the media was abuzz with new revelations from the German newsmagazine, Der Spiegel, citing documents leaked by Snowden, that the National Security Agency (NSA) had hacked into video conferences at the United Nations as well as into diplomatic missions around the world, including those of our allies, under a secret NSA program known as “Special Collection Service.”

There has been another glitch in the President’s charm offensive with the middle class – his name is Larry Summers. After loading the Securities and Exchange Commission with Wall Street’s lawyers, putting a man of dubious financial dealings, Jack Lew, in charge of the U.S. Treasury, the President finally (finally) outraged his fellow Democrats with the leaked rumor that he was considering Larry Summers for the most important monetary position in the world – the Chairmanship of the Federal Reserve Board of Governors.

On July 26 of this year, 19 Democrats and one independent sent an unprecedented letter to the President, urging him to nominate Federal Reserve Vice Chair, Janet Yellen, to lead the Fed when Ben Bernanke’s term ends early next year.

Summers has the notorious reputation as being part of the bullying gang that included the former Fed Chair, Alan Greenspan, and former Treasury Secretary, Robert Rubin, who triple-teamed Brooksley Born, Chair of the Commodity Futures Trading Commission in the late 90s when she tried to regulate derivatives. Their bullying succeeded, leading to unregulated derivatives being at the center of how Wall Street blew up the U.S. economy from 2008 to 2010. 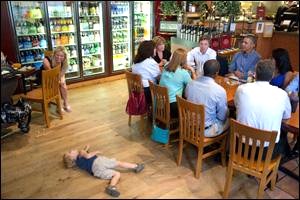 Summers was also part of the same team when it came to repealing the depression-era consumer protection legislation known as the Glass-Steagall Act. Once Glass-Steagall was repealed, Wall Street was free once again to merge its speculating casino units with banks holding FDIC insured deposits, leading to the 2008 taxpayer bailout of the too-big-to-fail banks.

In an interview with Bloomberg News, Oregon Senator Jeff Merkley, a Democrat who signed the July 26 letter to President Obama, had this to say of Summers: “I start from a position of being extraordinarily skeptical that his background is appropriate for the role of the head of the Fed. If you nominate someone who is a life-committed deregulator to be in a regulatory position and if you believe regulation is necessary to prevent fraud, abuse, manipulation and so forth, then there’s a lot of questions to be asked: Why is this person appropriate?”