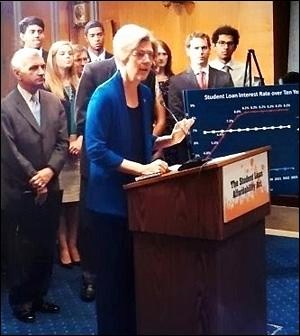 MIT’s President is supporting the plan, but it doesn’t take rocket scientists to understand the crisis. On July 1, if Congress does nothing between now and then, the interest rate charged on subsidized Stafford loans to college students will double from 3.4 percent to 6.8 percent.

On May 8 of this year, Senator Elizabeth Warren introduced her first piece of legislation, the Bank on Students Loan Fairness Act, which would allow students to borrow at the same interest rate on their student loans from the government as big banks pay when they borrow from the Federal Reserve’s discount window – a rate currently set at .75 percent. The rate would last for one year to allow Congress to enact a long term solution. Congressman John Tierney introduced a corresponding bill in the House of Representatives.

Fifteen organizations have signed on as supporters to the plan, including the American Association of University Professors, the American Federation of Teachers, the National Organization for Women and the United States Student Association. Two organizations have received over 1 million signatures on their online petitions:  the Progressive Change Campaign petition has garnered 623,595 signers as of this morning while the Move On petition has collected 442,220.

In announcing the plan, Warren called the rise in student debt, now over $1 trillion, “a risk to household spending” and a “threat to middle class stability” saying that together it was threatening economic recovery. Add a tepid job market for new graduates and the dangers broaden.

In a Senate floor speech on June 6, Warren said:

“Just last month, the Congressional Budget Office calculated that the government will make $51 billion this year off student loans. Think about that; $51 billion. And that’s $16 billion higher than the earlier estimate. We have the money to cut interest rates – if we’re willing to reduce the profits we make from our students…

“The second issue is values. Our college students already see that the system is rigged against them. They watched Wall Street bankers get bailed out while their parents lost jobs and struggled to hang on to their homes. They see special subsidies for companies that ship jobs overseas and exploit tax loopholes, while the investments in their future – in jobs at home – disappear…That’s not who we are. This does not reflect our values. We see students drowning in debt, and we should be there to help.”

Joseph E. Aoun, President of Northeastern University in Boston, wrote to the Senator in support of the plan:

“Northeastern is committed to working in partnership with the federal government to keep college affordable for our students. This year alone we committed $204 million to institutional scholarships and grants, a 9 percent increase over last year. Over the last six years, we have increased financial aid by more than double the rate of tuition and fees. But universities cannot do it alone. That’s why efforts like ‘The Bank on Students Loan Fairness Act (5.897)’ to protect consumers and preserve the federal investment in higher education are so critical. Lowering borrowing costs to reflect market rates would not only give students the chance to achieve the American Dream by going to college, it would also invest in innovation to keep our economy competitive.”

William Leahy, President of Boston College, wrote to thank the Senator for introducing the legislation and noted that the high level of debt carried by students is affecting “the career choices of many.”

The President of MIT, L. Rafael Reif, wrote that “thanks to generations of generosity from our alumni and friends, we are able to offer our undergraduates a world-class education without requiring them to take on unacceptable debt, but many institutions – and therefore many students – are not so fortunate. As you know, nationally, student debt recently surpassed total credit card debt for the first time, a perilous trend for America’s future.”

Senator Warren released the following fact sheet on student debt and how it would change under her proposed legislation:

The interest rate on federal subsidized Stafford loans is set to increase from 3.4 to 6.8 percent on July 1. If Congress does not act soon, millions of college students will see their student loan payments increase needlessly.

Student loan debt is a growing crisis, and it threatens our economic recovery. Outstanding student loans now total more than $1 trillion, surpassing total credit card debt. Last month, the Federal Reserve identified this mounting debt as a risk to household spending. The burden of loans keeps borrowers from buying homes, saving for retirement, and engaging in consumption that will keep our economy on the road to recovery. Keeping interest rates low is essential.

The biggest banks in the country – the ones that wrecked our economy and cost millions of Americans their jobs – pay next to nothing on their debt, while students pay nine times as much. The Bank on Students Loan Fairness Act lets students take advantage of the same low interest rates offered to banks through the Federal Reserve discount window: