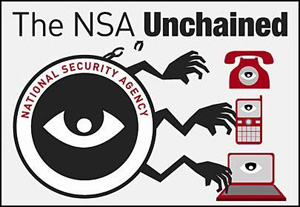 ACLU Posts This Graphic On Its Web Site, Showing the Broad Reach of the NSA Under the Obama Administration

The American Civil Liberties Union has acted swiftly against the revelation that the National Security Agency (NSA) is interpreting Section 215 of the Patriot Act to allow it to collect metadata on every phone call made and received in the United States. Calling it akin to “snatching every American’s address book,” the ACLU together with the New York Civil Liberties Union (NYCLU) filed a federal lawsuit yesterday in the U.S. District Court for the Southern District of New York, challenging the lawfulness of the program and asking for the phone records to be purged from the government’s databases.

The lawsuit was fueled by Edward Snowden, a 29-year old former contractor for the NSA, who turned over Top Secret documents showing the Obama administration is using Section 215 of the Patriot Act to broadly spy on Americans, rather than abiding by the limited scope the law allows. The details were first disclosed by Glenn Greenwald, writing in the Guardian newspaper on June 5. Snowden revealed himself as the source of the leaks four days later.

Members of the congressional intelligence committees have subsequently confirmed to the public that the program has been ongoing for seven years and has collected phone records of all Americans. The ACLU told the court that by detailing whom we speak to, when we talk, for how long and from where, the government has a “wealth of detail about our familial, political, professional, religious, and intimate associations.”

The government was able to obtain the phone records data through a secret order from the Foreign Intelligence Surveillance Court (FISC). The ACLU provided the court with background on how that process came into being:

“Congress enacted FISA after years of in-depth congressional investigation by the committees chaired by Senator Frank Church and Representative Otis Pike, which revealed that the Executive Branch had engaged in widespread warrantless surveillance of United States citizens — including journalists, activists, and members of Congress — ‘who engaged in no criminal activity and who posed no genuine threat to the national security.’ ”

In a press release announcing the lawsuit, the ACLU explained how the program could have a chilling effect on its own operations: “As an organization that advocates for and litigates to defend the civil liberties of society’s most vulnerable, the staff at the ACLU naturally use the phone — a lot — to talk about sensitive and confidential topics with clients, legislators, whistleblowers, and ACLU members.”

It said the “dragnet” surveillance program would cause people to think twice about contacting the ACLU since they can no longer do so with assurance of confidentiality.

The ACLU said the program also “constitutes an unreasonable search and seizure under the Fourth Amendment,” citing a case last year on GPS tracking by police, where five members of the Supreme Court indicated that individual bits of personal information over long enough periods of time could amount to such a level of invasion of privacy that it would be unconstitutional.

The Obama administration is further violating the intent of the Section 215 statute, according to the ACLU in a statement: “The statute requires that records seized under its authority be ‘relevant’ to an authorized foreign-intelligence or terrorism investigation.” But that’s not what the Obama administration is doing. It is operating a dragnet for all Americans’ phone records.