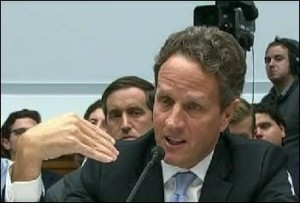 Geithner has been named a “distinguished fellow” at the Council on Foreign Relations (CFR), a think tank whose Co-Chairman is Robert Rubin, a former U.S.Treasury Secretary under Bill Clinton and the man who played a pivotal role on Citigroup’s Board during the financial crisis. Citigroup collapsed into the arms of the U.S. government with a bailout that exceeded $2.5 trillion, including equity infusions, assets guarantees and loans from the Federal Reserve Bank of New York, which Geithner headed before becoming U.S. Treasury Secretary. The SEC charged Citigroup with lying about its exposure to subprime debt by $39 billion and imposed a paltry fine of $75 million to settle the matter. It remains embroiled in multiple other lawsuits alleging fraud.

Geithner’s cozy role with Citigroup has been a topic of three major books. According to Ron Suskind in Confidence Men, Geithner ignored a directive from President Obama to wind down Citigroup, infusing it with enormous bailout funds instead. In Neil Barofsky’s Bailout, Geithner is the evil genius using the Home Affordable Modification Program (HAMP) to “foam the runways” for the banks, slowing down the foreclosure stream so the big banks could stay afloat, with no genuine goal to help struggling families stay in their homes. Then came Sheila Bair, former head of the FDIC during the crisis, portraying Geithner in Bull By the Horns as a Citigroup messenger boy. 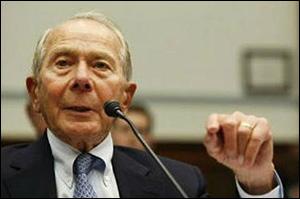 Another key name from the financial crisis pops up at CFR. The Honorary Vice Chairman of Geithner’s new employer is Maurice R. (Hank) Greenberg, the former Chairman and CEO of AIG, the company that collapsed into the arms of the U.S. taxpayer with a bailout of $182 billion. Hank Greenberg even has a think tank named after him at CFR: the Maurice R. Greenberg Center for Geoeconomic Studies.

In 2006, AIG paid $1.64 billion to settle federal and state probes into fraudulent activities. In 2010, the company settled a shareholders lawsuit for $725 million that accused it of accounting fraud and stock price manipulation.  In 2009, Greenberg settled SEC fraud charges against him related to AIG for $15 million; now he’s suing the U.S. Government because the bailout of AIG  didn’t work out in his favor.

That people like Rubin and Greenberg believe they are in a position to give the world advice on foreign relations or run a think tank is only slightly less egregious than their stewardship of Citigroup and AIG, respectively.

When Rubin left the Clinton administration, after helping to repeal the depression era investor protection law known as the Glass-Steagall Act, enabling Citigroup to become a casino housing speculative stock businesses as well as insured deposit accounts at Citibank, he proceeded directly to a job at Citigroup and earned $120 million over the next eight years.

Geithner is not likely to get a payoff that big; at least not yet. But he will get a handsome sum. He’s hired power lawyer Robert Barnett to shop his upcoming book and it’s unlikely he’ll have any bad words for his CFR colleagues.

Barnett has become legendary for getting high profile people, particularly those stepping out of government roles, mega book deals. In December 2000, Simon & Schuster paid $8 million for Hillary Clinton’s memoirs. He sold President Clinton’s memoirs for $10 million in 2001. Former British Prime Minister Tony Blair reaped $8 million from his book deal and Barnett also facilitated a consulting contract for Blair with JPMorgan. (The company was probed by Congress last year for losing over $6.2 billion speculating with insured deposits in London: the London Whale episode.)

Even President Obama, before taking his seat in the Oval office, hired Barnett to negotiate a deal to reissue Dreams From My Father. Barnett also secured a seven figure advance for Obama’s The Audacity of Hope.