Financial Services Chair Bachus: “This Is How the System Is Supposed to Work” [Is This Man on Bath Salts?] 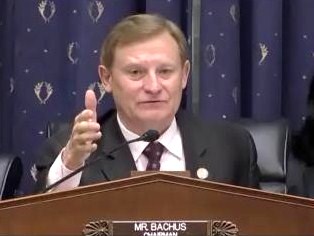 Spencer Bachus, Chair of the House Financial Services Committee, at the JPMorgan Hearing on June 19, 2012

Spencer Bachus is the Chairman of the powerful House Financial Services Committee. On June 19, 2012, Bachus issued a press release that carried his opening remarks for the hearing on JPMorgan’s $2 billion (and growing) losses.  The final sentence of that prepared text read as follows:

“Before closing, once again I want to re-emphasize the point that JPMorgan and its shareholders – not the bank’s clients, and more importantly, not the taxpayers – are the ones paying for the bank’s mistakes. This is how the system is supposed to work.”

This is how the system is supposed to work? Maybe for the Russian Mafia or in some dystopian universe where only descendants of the Koch brothers are permitted to live.  But here in America, those who have not yet had a Fox News lobotomy, believe this is exactly how the system is not meant to work.

First, Bachus is dead wrong on his facts. The money that JPMorgan was gambling with was tens of billions of depositors’ money. That fact is not in dispute, by JPMorgan or the regulators.  In any world but that of Congressman Bachus (Republican from Alabama), depositors are clients of JPMorgan Chase, even if their deposits are being used to bet for the house.

The way the system was working is that if JPMorgan’s bets win big, its CEO collects over $20 million in compensation annually and the head of the gaming enterprise collects about half as much.  Depositors get no share of those gains.  If the losses on the bets are big enough, taxpayers will be bailing out the firm again because JPMorgan is both too big and too intertwined to fail.

The taxpayers are also footing the bill for the following: 104 Federal examiners from the Federal Reserve, the Office of the Comptroller of the Currency, and the Federal Deposit Insurance Agency who are permanently stationed at JPMorgan because of its highly leveraged risks.   (JPMorgan has $70.1 trillion – with a “t’ – in derivative holdings according to its December 31, 2011 financial filings with its regulators.)  Those Federal employees are collecting salaries, medical coverage and pension benefits, all footed by the taxpayer.  Was JPMorgan a model of prudency and cautious risk management, it would not need eight dozen Feds crawling over its books on a permanent basis.

And taxpayers are providing additional banking welfare by being the ultimate guarantor of the deposits in JPMorgan’s FDIC insured banking operations, up to $250,000 per insured depositor.  Yes, the banking industry pays premiums to support the deposit insurance fund but the FDIC has a $100 billion line of credit from the U.S. Treasury and the taxpayer puts the following words behind every FDIC insured deposit: “Backed by the full faith and credit of the United States Government.”

Bloomberg News reported in an editorial on June 18, 2012 that the implied backing of the U.S. government is providing a whopping subsidy to the too big to fail banks, according to IMF and Bloomberg research: “JPMorgan’s share of the subsidy is $14 billion a year, or about 77 percent of its net income for the past four quarters. In other words, U.S. taxpayers helped foot the bill for the multibillion-dollar trading loss that is the focus of today’s hearing. They’ve also provided more direct support: Dimon noted in a recent conference call that the Home Affordable Refinancing Program, which allows banks to generate income by modifying government-guaranteed mortgages, made a significant contribution to JPMorgan’s earnings in the first three months of 2012.”

This is not the way the system is supposed to work; this is the way the 1 percent, teamed with the banking and lobbyist cartel and Koch brothers’ propaganda machine, have succeeded in making it work.  To hear these words coming out of the mouth of the Chair of the House Financial Services Committee – in the “people’s house” – is beyond contemptible.